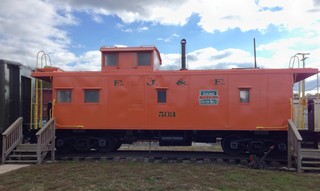 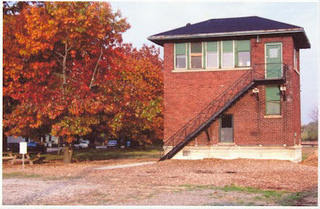 This 90-year old structure controlled train traffic through Griffith until it was phased out of operation in 1999. Through the efforts of Griffith citizens, schoolchildren, businesses, organizations -- plus donations from the EJ&E Railway, the Union Pacific and the Canadian National Railroads, and a grant from the National Railroad Historical Society -- more than $60,000 was raised to save the tower and move it to the Griffith Historical Park. 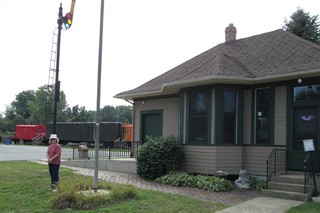 That tiny person you see is me standing in front of our 100-year-old Grand Trunk depot, which is the centerpiece of the Griffith Historical Park & Museum.

In the background are our railcars, from left to right, the EJ&E transfer caboose, the Pullman troopsleeper which carried military personnel during World War II, and part of our road caboose. The full caboose is pictured at the left.

What you can't see in the photo is the tall brick railroad tower that we saved from demolition and moved to our Historical Park in 2000. The tower is pictured at the left, too.

I hadn't realized it when I came to Griffith, but, in fact, I settled into the quintessential "railroad town." At one time, five different rail lines crossed in the middle of the main road through town, Broad Street. The trains earned Griffith the nickname "The Town that Came to the Tracks. And it was precisely because of those railroads that Griffith was founded where it was by real estate developers Jay and Elmer Dwiggins.

It's quieter now, with only the Canadian National still in operation through Griffith. But with CN trains running through, and since the Union Pacific leases trackage rights through town on the EJ&E tracks the CN purchased, Griffith still experiences a moderately heavy load of rail traffic. 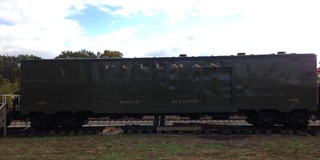